I am thrilled to announce that in September, I will be running the Great North Run for Mermaids!

Every young person deserves to grow up in an environment where they can be their true selves. I am supporting Mermaids because of the vital work they do to make this a reality for young gender-diverse people in the UK.

Unfortunately there is a large hate campaign against the trans and non-binary community and this can only be increasing the anxiety that young gender-diverse people are experiencing. Let’s be a light shining through that hate and show that we are here for them.

To help persuade you to part with your hard-earned cash, I will be live-streaming during some of my training runs later in the year to talk about how the training is going, why I’m running for Mermaids & some science facts too!

You can check out my fundraising page, here: https://www.justgiving.com/fundraising/clara-nellist-mermaids

Hello! It’s been a while. I let this website slip and stopped posting and honestly I don’t remember why. However, the longer it had been since I’d last posted the more I felt like I needed to have something especially good to post when I came back.

But as they say, perfection is the enemy of good. So, instead, I’m shaking off the dust. I’ll try to get back to posting regularly and we’ll see how that goes. A lot has changed since I was posting last. And a lot is still the same. Looking forward to sharing it with you.

I first started trying to learn French when I planned to moved to Geneva to work at CERN for my PhD. I took a few lessons and downloaded a podcast, but when I actually arrived, and was surrounded by Brits, or English speaking colleagues, I quickly found that other tasks took higher priority and I didn’t get any further than ordering food at a restaurant. 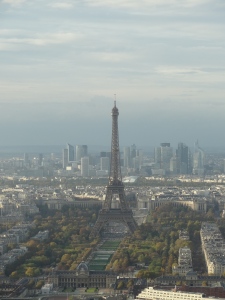 However, when I accepted a post-doc in Paris, I knew things would be different. Officially the work was in English since I would still be working with the same international researchers at CERN that I was before. But this time I was moving out on my own, so I wasn’t going to have a large British group of friends, and I had been warned that many of the engineers and support staff that I would be working with either didn’t speak English, or strongly preferred speaking French. Not to mention all of the daily life tasks I would have to face, such as finding an apartment. This was OK. In fact, it was one of the reasons looked outside of the UK for my first post-doc; I was tired of being the only monolingual in a crowd of bi-, tri- and even poly-linguals! I had to learn at least one language and moving somewhere I was going to be forced to speak it was the only way it was going to happen.

END_OF_DOCUMENT_TOKEN_TO_BE_REPLACED

As I write this I am sat in the departure lounge of Paris’ Charles De Gaulle airport waiting for a flight to Toronto. I’m headed to the PIXEL2014 conference at Niagara Falls to present the results from my lab. I’ve barely slept in the last week as I try to condense all of our research into a 25 minute PDF. I’ve amused myself by finding tenuous reasons to include photos of the #67P comet that the ESA ROSETTA mission is studying (because it’s cool right now), and also the cover art of the 1989 SimCity computer game (because it’s always been cool), not to mention almost compulsory photos of the beautiful conference location, the falls themselves.

This is one of the major conferences this year for researchers working on pixel detectors (it’s aptly named, unlike the BEACH conference that was in Birmingham, UK this year) and I’m really looking forward to the talks and the discussions. Also, as a young researcher, it’s important for me to begin to mix with other researchers in my area; to learn from them, share my experiences and just to be known!

Oh, they’ve just called my gate! Got to run…

Note: Edited to include said beautiful photos of the conference location.

CERN In All Seasons 🌼☀️ 🍂❄️ . . . #CERN #LHC #PhysicsLab #ThePhotoHour #Seasons #PhotoCollage #Geneva #Genf #Geneve #Switzerland
My new laptop sticker arrived yesterday! I wanted something professional-but-fun to have on the front of my work laptop. 👩‍💻 And also, to know which one's mine at a meeting 😅. 👩‍💻 So I covered it in photos of the @atlasexperiment and the LHC @cern, with cameos from @alice_experiment, @cmsexperiment and @lhcbexperiment! 👩‍💻 And there's even the most famous photo I ever took on there, can you guess which one it is? 👩‍💻 What do you think? 💻 👩‍💻 Huge thanks to @gelaskins for the extra effort they took to make sure this custom order printed exactly how I wanted 😊. (not an add, just a happy customer!). . 📷s © me and CERN . . . #CERN #Science #LHC #ATLASexperiment #CMSexperiment #LHCBexperiment #ALICEexperiment #GelaSkins #MacbookPro #ScientistsWhoSelfie #ScienceSwag #GeekLife
Rainy Geneva evening as I headed to the airport yesterday on the CERN shuttle. I liked the way the CERN logo looked with the reflections from the rain. ☔ #CERN #Physicist #AcademicNomad #Rain #Relections #Geneva #Switzerland #TravelGram
This morning I was at the S'Cool Lab in CERN to teach a workshop on Cloud Chambers to secondary school students from the UK [picture 1]. ☁️ What's special about cloud chambers? ☁️ Did you know that cloud chambers were used to discover antimatter? The positron, the antimatter particle of the electron, which is identical but with a positive charge instead of a negative one, was discovered by physicist Carl Anderson in 1932 [picture 2]. ☁️ We made our cloud chambers with some dry ice, a metal plate, alcohol, and a plastic fish tank! It's that easy to discover your own antimatter (keeping it is an entirely different problem...🤷‍♀️) [some of the equipment is shown in picture 3] ☁️ The cloud of alcohol is supersaturated because of the temperature difference and when a charged particle passes through, it forms droplets along the way, which we can see. 🌧️ ☁️ To see a really good example of a cloud chamber, the video and picture at 4 and 5 show a more permanent cloud chamber we have in the museum at CERN (the museum is called the Microcosm). ☁️ Can you see all the tracks? What particles do you think causes them? How did they get in there? (the sound gives a good hint 😊👍). ☁️ ☁️ ☁️ #CERN #SCoolLab #physics #ParticlePhysics #CloudChamber #CosmicRays #Particles #Antimatter #Geneva #Switzerland #science #Microcosm #PhysicsGeek #Scicomm
This weekend I'm on call for the @atlasexperiment, specifically for our control room shifts monitoring the Inner Detector. What does that mean? . It means I've left my weekend free to be called if someone who is scheduled to be on shift during this time gets sick, injured, or is otherwise unavailable. It's not likely that I'll be called, but it's important to know someone qualified is free if needed. . Yesterday, I went to our control room to check how everything was going, and to pick up the phone I can be called on. Since it was a beautiful and sunny day, I went for a walk around our Globe of Science and Innovation here at CERN. By the Globe, is this statue, covered in equations, diagrams and the names of historical scientists whose work has been influential to the research taking place at CERN. . This area is open to walk around on weekdays and on Saturdays. So next time you're in Geneva, why not come and check it out! And if you plan ahead, you can also book a tour of CERN. . . . #CERN #science #physics #scientist #physicist #ScienceTourism #Geneva #Switzerland #ThisIsWhatAScientistLooksLike #LHC
CMS is red, ATLAS is blue, We're both searching for the fundamental particles, That make up us and the Universe, too! ♥️ 📷s © @CERN ♥️ #AcademicValentines #CERN #ATLASexperiment #CMSexperiment #physics #science #BadPoetry #ValentinesDay #Valentines