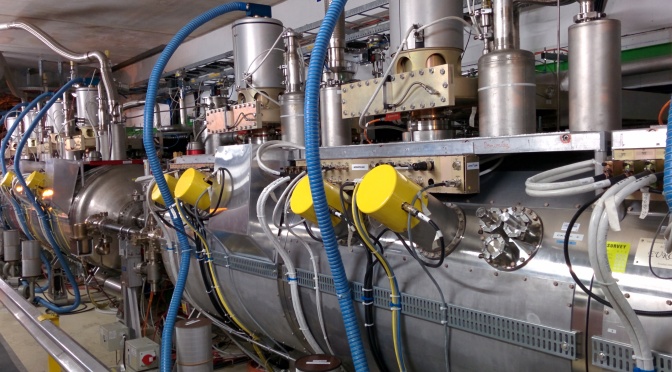 Last week I was the curator of the Real Scientists Twitter account (@RealScientists). It coincided with a trip to CERN for a test beam experiment so I took full advantage of being on site to show as much of CERN as possible. I ended up having a lot of fun being a tourist in my own lab and got to see parts of the site I’d never been to before! It started off a little slow as I found my feet with a new (to me) account and as I prepared for my trip, but everything really took off Tuesday morning when I landed in Geneva.

The first thing you see as you step off the tram is the #CERN globe and the new statue for the #CERN60 anniversary. pic.twitter.com/A63VKKTbkw

I wanted to include as many photos as I could, to allow people to feel like they were really visiting the lab. The following was a very popular image (but please excuse the typo, the WWW was invented just *over* 25 years ago).

Did you know that the World Wide Web was invented at #CERN almost 25 years ago. This plaque marks the very corridor! pic.twitter.com/r73XLvJXbM

I also talked about my preparations for the experiment at CERN, including a bit of shoe-shopping!

I've just got back from some shoe shopping! These may look cool, but they're also steel-capped to protect my toes 🙂 pic.twitter.com/xOZP9QI0sr

On the Wednesday I gave a virtual tour on the account of the LHC tunnel. It had to be a virtual tour as the tunnel is only open at certain times and this week wasn’t one of them. Indeed, CERN is starting to close a lot of the underground areas in preparation for starting up the LHC again next year!

The #LHC operates at 1.9 Kelvin (or about -271 degrees C!!) #ColdestPlaceInTheUniverse pic.twitter.com/FN7MHJr2Z3

The Real Scientists Mods made a Storify, which you can find here:

If you missed it earlier on @realscientists, here's a Storify of @claranellist's visit to the Large Hadron Collider http://t.co/LGUiWlUnk5

On Wednesday evening, I had a wonderful tour of the CLOUD experiment by a friend and CERN colleague, Christina (@chasingcloudsCW) and also Chris, who I met through Christina. I saved posting the images for the next day. It is a fascinating experiment and I’m glad I now know more about it. There’s also a recent TEDxCERN TED Ed animation about the research, by the spokesperson for the experiment, Jasper Kirkby.

Yesterday evening I went to visit the Cloud experiment at #CERN. Here you can see the Cloud chamber from above. pic.twitter.com/SwwecIfs6L

Another popular image was one from CERN’s Restaurant 1, where I explained just where we get the energy to make the LHC and the experiments work:

CERN runs on coffee. Did you know that R1 gets through 30 Kg of #coffee beans a day! http://t.co/a8a7jyEZS6 #CERN pic.twitter.com/8IS9H5KASm

To be diplomatic I shared images from visits to both the CMS and ATLAS experiments:

Here is me in front of the #CMS detector. It's only open because we're shutdown at the moment & people need access. pic.twitter.com/cNRScLtyLc

Here is a more recent photo of me with the #ATLAS detector, taken on a tour in April. #CERN #tbt pic.twitter.com/DD7FnwNSoF

Amusingly, the most popular image of the whole week seems to be the one of the Mouse Sanctuary outside of the CERN Computing Centre (those mice are adorable!).

Here you can see the Computer Mice enjoying their sanctuary: #CERN pic.twitter.com/HD8FBmXSIW

Near the end of the week, I managed a visit to the CERN Control Centre, somewhere I’ve been wanting to go to for a long time! This is the control room that runs the accelerators at CERN; not just the LHC, but also the smaller accelerators that feed the LHC and other experiments at CERN (such as the one I’m here to work on).

Here you can see the inside of the #CERN Control Centre. Each semi-circle works on a different part of the machine: pic.twitter.com/1pSmAgNhor

DO NOT FLICK THIS SWITCH! I know it's tempting to. #CERN #LHC pic.twitter.com/BKE8zhB6JP

I had a fantastic time as curator and as soon as I’ve finished updating the full Storify of my week, I’ll add that here.

Next week, Professor Danielle George (@EngineerDG) will be curating the account and will include behind the scenes information about her upcoming Christmas Lectures with the Royal Institution. Make sure to head over and take a look!