This post is a quick one as I’m currently on holiday in New York. Today we went to visit the Rockefeller Centre and nearby is a statue that looks very familiar to me. The bronze statue is of a male figure, the Titan Atlas, holding up the sky. The reason it is so familiar to me is because my collaboration at CERN is called ATLAS and our logo is based on this statue (although it’s recently gone through re-design to make the figure more androgynous). Below you can see the previous version of our logo, and the newer design that we use now.

Since I was there, I couldn’t resist have a photo taken with the statue. I like to add as many photos and images as possible* into my presentations and so I’m sure this will be useful. Here’s the photo!

In the nearby LEGO shop, there is a LEGO version of this statue. We already have LEGO version of our detector, both in a large version (shown below with Prof. Higgs), and in smaller versions. If you would like to see the small version as part of a LHC LEGO set, you should head over to the LEGO IDEAS page where you can vote for it! 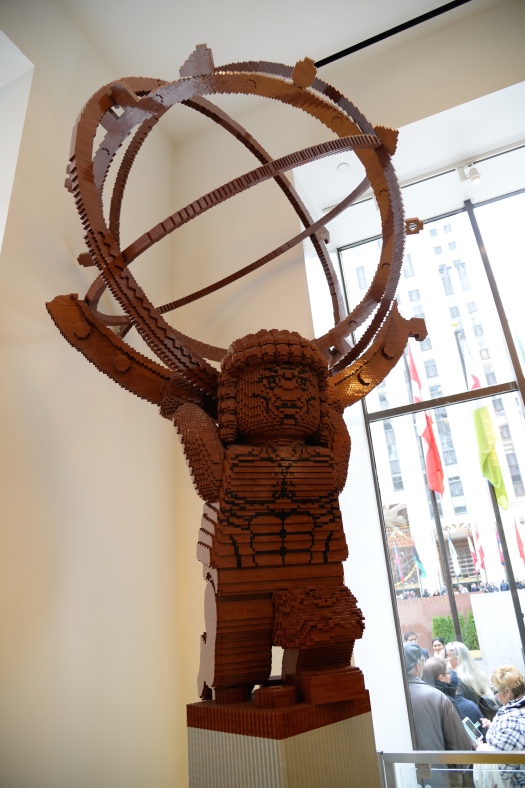 Professor Higgs signing the ATLAS LEGO rebuilt at the University of Manchester.

I should head off now, there’s a lot more sight-seeing to do!

(*Much to the strain of the upload server when it comes to adding my presentation to the online agenda.)

Particle physicist working on the ATLAS experiment at CERN, and science communicator. View all posts by Clara Nellist

2 thoughts on “ATLAS in New York”

I needed to make my work space atmospheric for an online event last Friday and afterwards I realised I'd made a little shrine to my coding duck 😄
I was so excited to hear more about the @europeanspaceagency's plans for their new astronaut selection programme today!!
CERN Globe of Science and Innovation in the rain.
The LHC Shanty!
Went for a gentle 10k run in the freshly fallen snow this afternoon. Was really good to get outside in daylight and burn some energy.
A belated Merry Christmas!! This year I didn't travel to see family, but we still managed to make it festive. I hope the holidays have been good to you 🎄
Loading Comments...
Comment
×
%d bloggers like this: